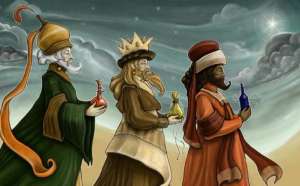 38 Afterward Joseph of Arimathea, who had been a secret disciple of Jesus (because he feared the Jewish leaders), asked Pilate for permission to take down Jesus’ body. When Pilate gave permission, Joseph came and took the body away. 39 With him came Nicodemus, the man who had come to Jesus at night. He brought about seventy-five pounds of perfumed ointment made from myrrh and aloes. 40 Following Jewish burial custom, they wrapped Jesus’ body with the spices in long sheets of linen cloth. 41 The place of crucifixion was near a garden, where there was a new tomb, never used before. 42 And so, because it was the day of preparation for the Jewish Passover and since the tomb was close at hand, they laid Jesus there.

Merry Christmas! It is very late/early as I sit in the twinkling glow of our Christmas lights. The presents are all wrapped, everyone else is asleep (except maybe Emily who is making everyone presents this year and has been working very hard). The night is dark, quiet, and still. I love Christmas. One of my favorite parts is hanging out with Amy on Christmas Eve after the kids are all in bed. We unpackage toys, wrap gifts, and check one last time to make sure all the gifts are even between the kids. I imagine their reactions to that new thing they have been wanting, or even better, that thing I know they will love that they don’t even know exists yet. I know some Christians go on about the commercialization of Christmas. There are reasons to be concerned, but they relate to the consumerist nature of our culture generally, not some anomalous thing that happens once a year.

I think some of the Christian reaction against Christmas can be chalked up to being contrary for its own sake. I think they are insulted that people enjoy Christmas but avoid religious expressions of it, so they return the insult and fight for their religious day. But I’m not interested in a culture war because that makes it hard to love neighbors and connect with people. Like most people, I love giving gifts. It is a good thing that this has become such a dominant cultural event. It makes it easier to capture people’s imaginations with the amazing gift of God’s love, of God’s Son. They have received gifts before (perhaps amazing ones) and have some idea of how that feels. More than that, they have given gifts, and not just gift cards and socks, they have some experience in finding just the right gift, just what is needed, just what is most wanted, and then waiting with anticipation for the moment when the recipient opens the gift. Will they love it? Will they keep it? We know how this feels because we are a gifting culture (at least once a year), which helps us relate to a God who gives his own Son to us and then waits for our response. Will we like him? Will we love him? Will we keep him? Instead of fighting against culture, we can participate in culture and leverage it to help tell the story of God’s love.

And today we see that part of God’s story is receiving gifts from us. Jesus was given myrrh as a small boy (Matt. 2) and here he is given myrrh again. Both times it is a gift fit for a king. Both times it is given by a half-follower, someone who has heard of Jesus but is not (yet) a committed follower. When the wise men came through Jerusalem, Herod and his court asked about when and where to find the baby, but they only did so they could fight, not follow. No one else went down with gifts. Here after Jesus has died, none of his followers have come to bury him. They were too worried about an ongoing fight with the religious leaders to show their faces in public. The magi, Joseph, and Nicodemus are free to offer such gifts to Jesus precisely because they are not part of a cultural struggle that becomes more determinative than the Good News itself.

My point is – enjoy today. Enjoy the gifts you receive. Enjoy giving gifts to others. Enjoy the gift of time with family. Enjoy the food. Enjoy Christmas in all its spiritual and cultural significance. And don’t feel guilty for enjoying it, just enjoy it. Instead of distancing ourselves from the culture around us, let’s reengage it, let’s participate in it. And not in artificial ways that mimic culture while keeping a ‘safe’ distance from it (I’m looking at you Christian sub-culture), but for reals. Only by participating in our culture can we show God’s love for this world and only in dropping our war on culture can we become like the wise men, Joseph, and Nicodemus – people who give good gifts to God.