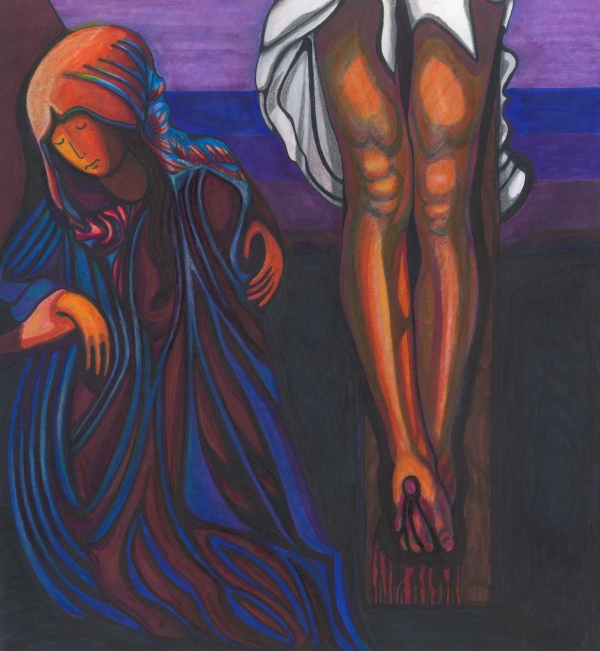 17 Carrying the cross by himself, he went to the place called Place of the Skull (in Hebrew, Golgotha). 18 There they nailed him to the cross. Two others were crucified with him, one on either side, with Jesus between them. 19 And Pilate posted a sign on the cross that read, “Jesus of Nazareth, the King of the Jews.” 20 The place where Jesus was crucified was near the city, and the sign was written in Hebrew, Latin, and Greek, so that many people could read it.

23 When the soldiers had crucified Jesus, they divided his clothes among the four of them. They also took his robe, but it was seamless, woven in one piece from top to bottom. 24 So they said, “Rather than tearing it apart, let’s throw dice for it.” This fulfilled the Scripture that says, “They divided my garments among themselves and threw dice for my clothing.” So that is what they did.

25 Standing near the cross were Jesus’ mother, and his mother’s sister, Mary (the wife of Clopas), and Mary Magdalene. 26 When Jesus saw his mother standing there beside the disciple he loved, he said to her, “Dear woman, here is your son.” 27 And he said to this disciple, “Here is your mother.” And from then on this disciple took her into his home.

Unlike the other Gospels, Jesus carries his own cross. Trying to fit the accounts together, commentators usually conclude that Jesus carried it first and then Simon carried the rest of the way after Jesus stumbled. Be that as it may, John doesn’t have Jesus stumbling or sharing the load with anyone. This does not mean he is correcting the other Gospels, just that talking about Simon from Cyrene doesn’t help get John’s overall point across. John did not record Jesus struggling in the garden either, so this should come as no surprise.

John also leaves out any details about the crucifixion. The act itself is barely mentioned in v. 23 and in the most circumspect tone. Thinking about Mel Gibson’s movie The Passion of the Christ (and the trend it represents), I am struck by John’s minimal account, the complete opposite of how we tend to tell this story. Perhaps this is just another example of John’s tendency to stress the divinity of Jesus, but it can also serve as a powerful counterpoint to our culture and its fetish for graphically depicted violence. Using the death of Jesus to satisfy our celluloid blood lust is creepy. We should take a lesson from John that less is more.

The last thing that stood out to me was Jesus entrusting care of his mother to the beloved disciple. We talked about this unnamed person the other day. Here BD appears alongside Mary Magdalene, which might indicate they are the same person, as Mary is named just before Jesus sees his mom with BD. But Jesus refers to BD as her new “son” and the explanatory statement that follows uses masculine pronouns. These might serve to protect BD’s anonymity or they might mean BD was someone else. Probably not one of the Twelve though, as none of the Gospels record any of them being present and make specific statements about them all fleeing. I’m going to work on BD next year for what happens next on this blog, so let’s move on.

Because I do think something significant is going on here. The early church in Acts was known for its care of widows. Women in that culture who had no husband or son were vulnerable. Legal standing, property ownership, earning money, and retaining wealth were all issues where being male or having one in your life made things a lot easier. Women who didn’t have that often struggled with being socially and economically disenfranchised. The early church had a particular mission to women in this condition. This tracks with a major concern God expressed through the Hebrew prophets, but I think it also carried on and expanded a core mission Jesus began. As we have seen, Jesus already had a group core followers that included women leaders, people of social power and economic means, and also people living at the margins of society. In this moment, Jesus affirms both care for those in need and more than that, he lifts up the recipients of the community’s care to a place of honor and even leadership.

I don’t think we see enough examples of this, but they do exist. Dorothy Day’s Catholic Worker Movement comes to mind, where the division between leaders who have and give resources on one hand, and the recipients who do not have and do not lead, on the other hand, gets broken down. I’m not all that interested in trying to trace Mary’s “actual, historical” role in leading the church. It seems clear she was involved and was held in high esteem. All while receiving what we would call “aid,” but we would be better off calling “doing life together.” In short, what I’m saying is that we should look at those neighbors around us in need, and we should hear the words of Jesus: “This is my mom, now she’s your mom. This is my granddad. Now he’s your granddad. This is my brother. Now he’s your brother.” This is not unlike what Jesus says in Matt. 25, where we are to see Jesus himself in the people we care for. I think the BD’s care for Mary adds to our understanding the aspects of honoring, including in community, and recognizing authority in those we care for.