40 When the crowds heard him say this, some of them declared, “Surely this man is the Prophet we’ve been expecting.” 41 Others said, “He is the Messiah.” Still others said, “But he can’t be! Will the Messiah come from Galilee? 42 For the Scriptures clearly state that the Messiah will be born of the royal line of David, in Bethlehem, the village where King David was born.” 43 So the crowd was divided about him. 44 Some even wanted him arrested, but no one laid a hand on him.

45 When the Temple guards returned without having arrested Jesus, the leading priests and Pharisees demanded, “Why didn’t you bring him in?”

46 “We have never heard anyone speak like this!” the guards responded.

47 “Have you been led astray, too?” the Pharisees mocked. 48 “Is there a single one of us rulers or Pharisees who believes in him? 49 This foolish crowd follows him, but they are ignorant of the law. God’s curse is on them!”

50 Then Nicodemus, the leader who had met with Jesus earlier, spoke up. 51 “Is it legal to convict a man before he is given a hearing?” he asked.

52 They replied, “Are you from Galilee, too? Search the Scriptures and see for yourself — no prophet ever comes from Galilee!”

53 Then the meeting broke up, and everybody went home. 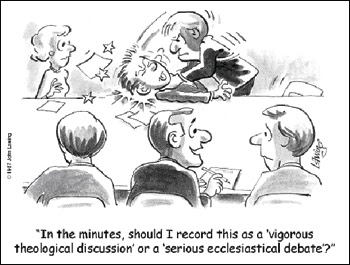 My first reaction reading this passage by itself: sounds like a church meeting to me. Let’s run down a handy checklist to see:

Yep. Definitely been in some church meetings like this. And some blog comment areas. And some Facebook groups. As I mentioned as recently as yesterday, we should always look for parallels between the ‘bad guys’ in the Gospels and ourselves. Same goes here. I haven’t just been in those meetings and message boards, I have participated in them. Sure, I’d like to think I was more often in the Nicodemus role, but truth be told, this hasn’t always been the case. If you’ve been there you know, emotions can run high in these situations. We can find ourselves caught up in religious fights and miss Jesus in the process. Notice how there are no red letters in today’s Red Letter Year post? Could it be Jesus isn’t very interested in our religious arguments? Maybe we could learn to be less interested, and less emotionally invested, in these too.

Anyway, here are three things to notice in this passage and then a takeaway for each: